Come flying with us

So what is the big deal about Gyroplanes?

Gyroplanes (or Gyrocopters) represent a silent revolution in personal aviation that has taken off in the last 10 years: like microlights they are small two-seater flying machines but UNLIKE microlights they fly as stable as a Jumbo Jet even in gusty conditions, cannot stall and can land in spaces as small as a tennis court.

Although they look similar to helicopters, their construction and way of flying is completely different. To put it simply, gyroplanes have spinning blades on top to provide lift (similar to helicopters), but the rotors are not powered by the engine, instead gyroplanes have a propeller engine on the back that provides thrust. When the propeller moves the gyroplane forward, it pushes wind through the rotor blades which simply self-propel (auto-rotate) due to the way that the air flows through them. This induces them to spin progressively faster until the lift they produce raises the gyroplane into the air. The two diagrams below show the main difference in operation between a helicopter and a gyroplane

If the engine fails the pilot does not even need to keep up the airspeed. As the gyroplane begins to descend the air will still be flowing into the rotors from below, keeping them auto-rotating thus dampening the descent to a speed similar to a parachute.

Mind you, you would not want to land this way, as you would seriously damage your machine and hurt yourself! However it does make it feasible to land in a very short space. 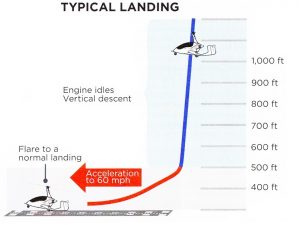 They are stable and easy to fly.

Gyrocopters tend to be easier to fly as they only have three flight controls (rudder pedals, a throttle and a control stick) which is way simpler than a plane or helicopter, making it perfect for beginners who have never flown before. In addition to this, gyrocopters don’t require as much space to be able to take off or land as aeroplanes or helicopters do. Most gyrocopters nowadays only require around 20 meters of runway for wheels to get off the ground and around the same for a touchdown roll when landing. That means they can be flown from practically everywhere and, above all, can land safely even in very rough fields given their extremely low touchdown speed (typically 15 mph)

As the stick controls the entire rotor, and not just small flaps on wings as in the case of an aeroplane, gyroplanes can easily perform extremely tight turns impossible with other small aircraft: a very welcome ability should you need to maneuvre into a small field during an emergency landing.

Can they take off vertically, and hover?

No they cannot: this would require a powered rotor and therefore only helicopters can do this. For the same reason they cannot hover without losing height. However gyroplanes can fly as slow as 35 mph, so hovering over the ground is practically possible on a breezy day by simply pointing the gyroplane into wind.

When were gyroplanes created?

The father of the gyrocopter is Juan de la Cierva, a Spanish engineer, who in the early 1920’s was obsessed with creating an aircraft with three engines that could fly safely in lower speeds. De la Cierva created a few protoypes (the C1, C2 and C3) but they all failed due to mistakes in the rotor design. That was until, in 1923, when de la Cierva completed a full flight with the C4 model, which he called “autogiro” in spanish. And thus, the modern Gyrocopter was born!

So why their recent rise in popularity?

Since the invention of the helicopter gyroplanes took the back stage and were limited to home built machines. This all changed in the last few years when factory built gyroplanes certifield to strict aviation standards arrived on the market. Today there are dozens of companies proposing several models of different seating capacity and open or fully enclosed versions.

Here is a good introductory video which provides an excellent overview.

Come flying with us